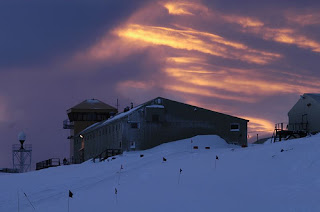 “Nacreous Clouds above Rothera Base” by Jade Berman (divedivajade).

One title held at Rothera is ‘Annals of Glaciology’; two titles held in South Georgia are ‘CCAMLR statistical bulletin’, and ‘CCAMLR science’. Luckily, you don’t have to travel to either library to get hold of them, as there is another copy held in the BAS main library in Cambridge!