We conducted a survey at the end of last year as a follow-up comparison study to the duplication survey conducted with SUNCAT Contributing Libraries in June 2007. Since the last survey a number of changes have been made to SUNCAT in an attempt to ameliorate the effects of duplication on the catalogue. The aim of this survey was to ascertain if these changes had any significant impact on respondents’ experience and tolerance of duplication on SUNCAT.

The results from the survey with SUNCAT Contributing Library staff could not confirm any significant change in the level of duplication in SUNCAT, however, they did highlight that user perception of the issue had improved. In the original survey conducted in June 2007, respondents found 28% of the searches produced an unacceptable level of duplication, however in this most recent survey this figure was reduced to 15% of the searches conducted. Further, the percentage of searches producing an acceptable number of searches increased from 38% to 54%.

This apparent improved level of tolerance for duplication in the catalogue is most likely due to the addition of the institutions holding each title to the search results display. This change dramatically reduced the number of records respondents had to enter to check a particular institution’s holdings for a title. Further, 80% of the respondents indicated that the change to the interface had made either a significant or major improvement to their experience of searching SUNCAT. 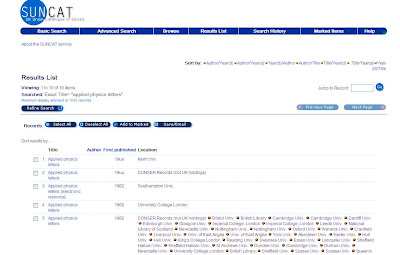 Overall this is positive news for SUNCAT, but we recognise that there is still work to be done in this area. The list of holding libraries currently displays in the order libraries were loaded into SUNCAT, however, as we would prefer these to display in alphabetical order we have entered a development request with our partners, Ex Libris. Improving pre or post search limits or filters would also be desirable.
SUNCAT is the Serials Union Catalogue for the UK. Visit the service at http://www.suncat.ac.uk or the SUNCAT blog at http://suncatblog.blogspot.com
March 5, 2009  Posted by suncat at 11:15 am News Tagged with: duplication, survey  Add comments